Are High Scores of Self- Deception on Pre-Hire Assessments More Common Among Young People?

Are your Twenty-Something Employees Full of $%^&

I received a call from a client asking if there was something wrong with PsybilⓇ, our assessment system. He had just assessed a set of candidates and 7 of the 8 had self-deception scores higher than the 80th percentile. After making sure our system was working, I called him back and asked him if there was anything unique about this particular group. He stated that they had started a junior executive program and that all of the candidates were between the ages of 25 and 30.

Why were they so worried about these scores? Because self-deception among leaders is one of the core causes of a toxic culture.

Could it be that the baby boomer complaints about Millennials’ misplaced self-confidence is true? This caused me to look through all our assessment results and gather as many ages of users as possible.

I had over 800 self-deception scores and the ages of the test takers. The 800 were virtually all professionals with many in, or applying for, executive positions. All were assessed either as part of a hiring or succession planning process or for development. Importantly, in the case of my client as mentioned above, the assessment takers were all from a narrow age group (25-30).

Analysis of Self-Deception Scores and Ages

The results are outlined in the graph below. Note that we have a spike of scores among Twenty-Somethings at the 80th percentile with the rest of the curve remaining flat. The Thirty-Plus group tends to be flatter across the board with peaks in the middle average and high average.

Equally interesting is the rate of scores above the 90th percentile is relatively similar between Twenty-Somethings and Thirty-Plus. 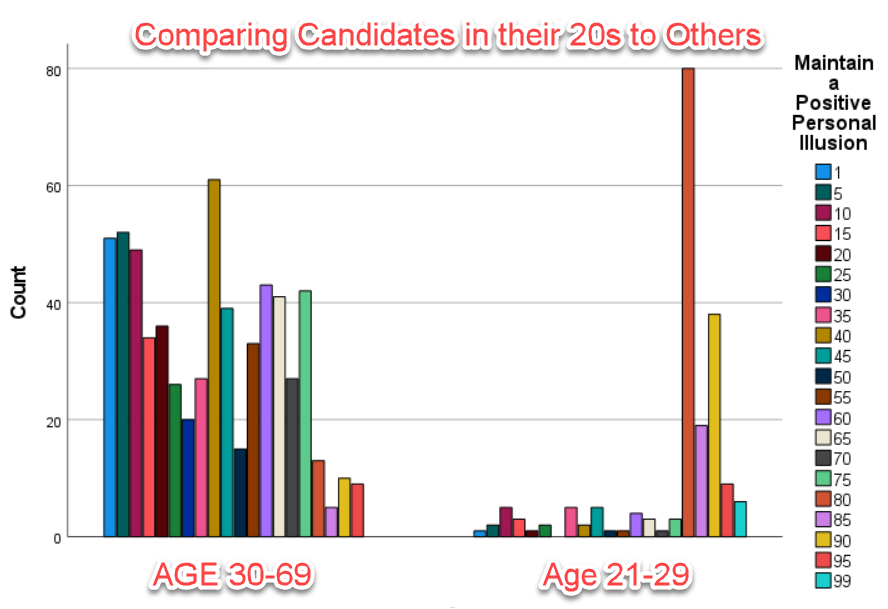 What Does this Mean?

Our data suggests that there are two different phenomena going on:

While reviewing our data, we found a couple of other insights that we will write up in future blogs. Send us a note if you are curious now — we would love to hear from you and use your comments in future blogs.

Note: Thank you so much to our clients who helped. Although far from the perfect randomized study, they provided the ages of 824 users.